So I've been putting some thought as to what I'm going to do with this blog, and I think I'm going to use it to document my studies and progress along the path to mastery. Incidentally, today is the 5th anniversary of my start at the Oatley Academy, a decision which has had a truly profound and positive effect on my artistic career. Thinking back to where I was when I started, the road travelled looks a lot further than it can often feel when assessing ones current progress. There is still an infinite path ahead of me, but sometimes it can be reassuring to take a look back at how far you've come :-)

Anyway! I'm currently reading Alla Prima by Richard Schmidt at the moment. I've had it on the shelf for a good few years, but I've really got into reading it since Christmas. Aside from a really engaging writing style, so much of what he's had to say about the process of starting a painting has made sense. Between this and a post by Marco Bucci I watched, a couple of things have started to click this past week... most notably edges.

When I first started painting, I found thinking in terms of lighting and volume immensely challenging as I'd come from a comics background. To me, an image was primarily about structure and linework, so the notion of creating dimensionality with shapes was just a struggle. Texture was a tough one too, but Painting Drama 2 helped a lot with that (!). Recently however, I feel I've had a breakthrough moment with controlling edges in a composition, and have really started to enjoy slowing the brush movement down and focusing on the act of making marks.

It's funny that sometimes in the process of painting, it can be really small sections of a piece that give you the greatest satisfaction. Although it's a long way from being complete yet, here's a little portion of a painting I'm working on that I was really pleased with last night. 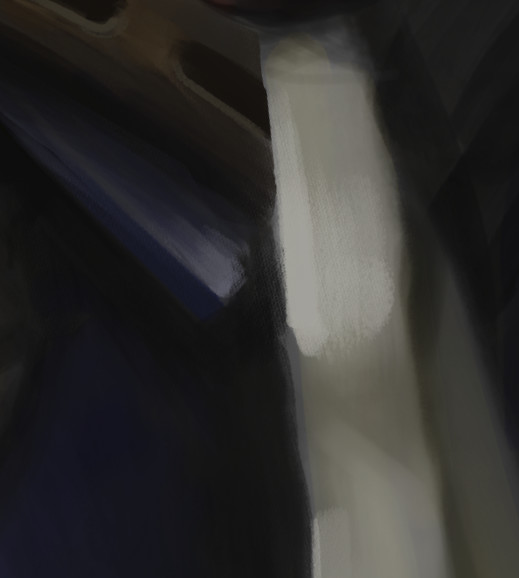